Glossary of Integumentary System Terms and Terminology for the TEAS

The Role of the Integumentary System

The skin is by far the largest and most vast organ of the entire body.

The integumentary system plays several roles in the body including:

The Parts of the Integumentary System

The integumentary system consists of the: 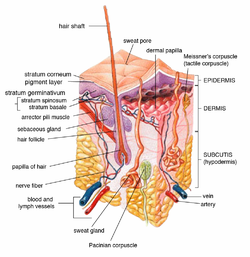 Cross-section of all skin layers.

The skin is the body's first line of defense against the threats in the environment that are external to the body.

Cross-Section of All Skin Layers

The skin, as shown in the picture above, has several layers that include the following layers from the most exterior and upper level to the deepest most inner layer in that sequential order are:

The epidermis is avascular, which is defined as without blood vessels; the skin is comprised of squamous epithelial cells with the main type of cell being a cell that contains keratin which plays a role in the protection of the body and also prevents the skin from becoming waterlogged.

The dermis, the middle layer of the skin, contains blood vessels and it has two sublayers which are the reticular and papillary sublayers, both of which gives the skin its elasticity and its ability to stretch, such as occurs when there is swelling under the skin and when the abdominal area skin stretches during pregnancy.

The hypodermis, which is also referred to as the subcutaneous layer, is the fat storage layer of the skin. These fats, which are stored in the hypodermis, are ready for use and ready for the transport of this to cells when this energy is needed. This layer of skin with fat also maintains bodily temperature by serving as an insulator of the body. 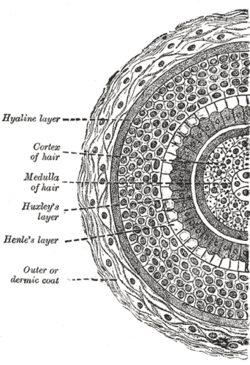 Cross section of a hair. 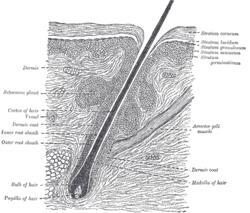 Section of skin, showing the epidermis and dermis; a hair in its follicle; the Arrector pili muscle; sebaceous glands.

Hair, like the fur of animals, plays a role in keeping the body warm. Additionally, the hair of the eyelashes protects the eyes from foreign debris getting into the eye from the external environment. 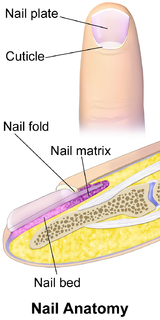 The nails consist of several parts including the:

The cuticles are dead skin cells that are pushed over the peripheries of the nails at their base and around the edges. Cuticles are removed during nail care and a manicure.

The nail sinus is the base of the nail under the skin where the new nail tissue emerges from.

The nail matrix is the tissue below the surface of the nail that is protected by its nail plate. This part of the nail, the nail matrix, will continue to grow infinitely until its nutrition and its blood supply are no longer adequate.

The nail bed is skin that has three layers like other skin. This skin is found below the entire nail plate.

The lunula, as the name suggests, is the half-moon (luna) white area at the base of the nail. 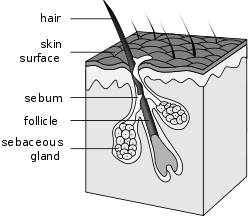 Sebaceous glands are exocrine glands, as contrasted to endocrine glands. Sebaceous glands lubricate and moisturize the skin with an oily secretion which is called sebum and the sebaceous glands also play minor roles in the thermoregulation of the body and its protective role that armors us against the invasion of infections because sebum is acidic and not an environment that germs thrive in. 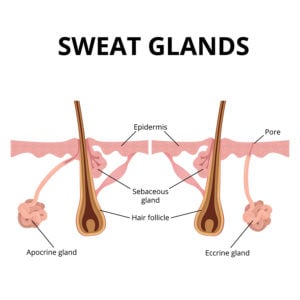 Sweat glands are eccrine and apocrine glands that secrete sweat to the surface of the skin.

Alene Burke, RN, MSN
Alene Burke RN, MSN is a nationally recognized nursing educator. She began her work career as an elementary school teacher in New York City and later attended Queensborough Community College for her associate degree in nursing. She worked as a registered nurse in the critical care area of a local community hospital and, at this time, she was committed to become a nursing educator. She got her bachelor’s of science in nursing with Excelsior College, a part of the New York State University and immediately upon graduation she began graduate school at Adelphi University on Long Island, New York. She graduated Summa Cum Laude from Adelphi with a double masters degree in both Nursing Education and Nursing Administration and immediately began the PhD in nursing coursework at the same university. She has authored hundreds of courses for healthcare professionals including nurses, she serves as a nurse consultant for healthcare facilities and private corporations, she is also an approved provider of continuing education for nurses and other disciplines and has also served as a member of the American Nurses Association’s task force on competency and education for the nursing team members.
Latest posts by Alene Burke, RN, MSN (see all)
Share This:
Facebook
Twitter
LinkedIn
Reddit