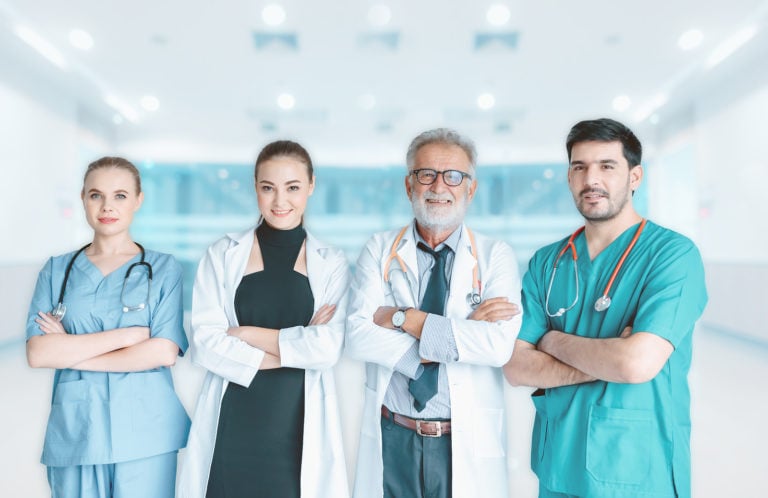 So, you've decided to enter a medical career – congratulations. While money is not and should not be your sole concerning factor in choosing a career, it is an important consideration. Earning potential and average salary figures can sometimes help you decide between different types of qualifications in the healthcare field. Many students who know they want to enter a highly advanced career in medicine may wonder what the difference in salary is for some of the roles that require lengthy educational programs. It is important to note that salaries offered can vary far more greatly than you might imagine.

Learn more about the differences between NPs, MDs, and more

Let's first look at the Nurse Practitioner (NP) salary ranges. According to the Bureau of Labor Statistics' most recent report (from 2020), the median average salary for a nurse practitioner was $118,040 annually, while the average hourly rate was $56.75. The lowest 10% of earners were reported to have an average salary of $79,470 (hourly $38.21) while the highest earners enjoyed salaries in the region of $163,350 ($78.54 per hour). NP salaries also vary depending on the working environment and geographical location, of course.

Top salaries for nurse practitioners are in accounting/bookkeeping, payroll, and tax preparation with an average salary of $148,980 and $71.62 per hour. Business, political & professional services comes in second at $133,800 salaried, and $64.33 hourly. Thirdly, home health services lands at $133,170 and $64.03, respectively.

The three top paying states for NPs in the U.S. are California, New Jersey, and New York.

A Doctor of Nursing Practice (DNP) enjoys a higher rate of pay compared to an MSN-prepared nurse practitioner or RN due to the more intense education and medical responsibilities required. The starting pay is an average of $80,790 annually, or $38.84 hourly, which is slightly higher than the mean average pay of all nurse practitioners. Some self-reports on Salary.com state base pay at just over $111k.

Along with higher pay, DNP graduates enjoy a range of career opportunities that are not always open to nurse practitioners. The top-paying job roles include anesthetists at $187k, neurology nursing at $133,780, and oncology nursing at $130,360 per year.

That said, pay is slightly lower in academia generally – not just in medical research and teaching. Therefore, you can expect to earn a salary of around $99,000 with a nursing Ph.D.

While academia has the lowest pay in the medical arena, medical doctors or physicians enjoy the highest rates of pay. Generally, those who hold medical doctorates will become family and general practitioners working in clinics and hospitals. Their average pay according to the U.S. Bureau of Labor Statistics is $214,370 per year. However, Glassdoor.com reports an average of $183,429. This will also vary based on the specialty of the medical doctor and their place of employment.

As with any other job, pay rates will be further determined by state and region. Currently, the top-paying states in the U.S. for family practitioners are Idaho, which pays $305,960 annually; Alaska, at $297,130 annually; and New Hampshire at $294,830 annually.

Catherine Burger, MSOL, RN, NEA-BC
In her 30 years as a registered nurse, Catherine Burger has worked in a myriad of patient care and leadership specialties across the continuum of healthcare, including labor and delivery, ICU, home health, ambulatory care, education, and clinical practice consulting.

Upon completing an ADN from Pacific Union College, Catherine worked in various bedside roles until her career evolved into nursing leadership for a large HMO in Northern California. She then completed a BSN at the University of Phoenix and a Masters in Organizational Leadership at Colorado State University.

Catherine is the founder and CEO of a consulting and freelance writing business (which includes a nurse leader mastermind forum), is an advanced board-certified nurse executive, serves as the Employee Health & Infection Control Nurse for an FQCA and is the Media Response Specialist for RegisteredNursing.org.

Situated in the beautiful Idaho mountains, Catherine loves traveling and spending time with her husband, their five children, and raising service puppies for Canine Companions for Independence.