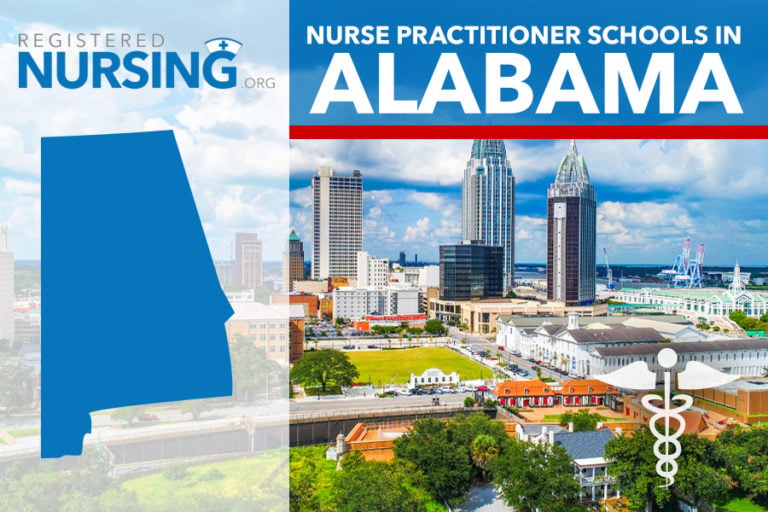 In the state of Alabama, becoming a Nurse Practitioner involves individuals obtaining either a Master of Science in Nursing (MSN) or a Doctorate of Nursing Practice from an accredited educational institution.

Earning one's Master of Science in Nursing (MSN) allows an individual who is already a licensed registered nurse (RN) to become a Nurse Practitioner who is trained to practice in a specialized area of nursing/medicine. Such specializations include psychiatry, adult gerontological primary and acute care, pediatric primary and acute care, women's health, neonatal care, and family practice.

Other advanced degrees in nursing individuals can pursue are Doctorates of Nursing Practice (DNPs) or Doctorates in Nursing Philosophy (PhDs). People who have obtained their DNPs will traditionally be employed at the apex of clinical nursing practice, while students who have received their PhDs in nursing philosophy will likely teach future nurse practitioners.

Individuals should make sure that whichever program they are looking into, whether it's an MSN or DNP program, that the program is accredited by the Commission on Collegiate Nursing Education (CCNE). The CCNE is an agency recognized officially by the U.S. Secretary of Health and is meant to uphold both quality and integrity of undergraduate and graduate university degree programs in nursing.

Master of Science in Nursing (MSN) degree programs usually take around two years to complete. Doctorate of Nursing Practice (DNP) degrees, on the other hand, take anywhere from one to two years complete for those who have already obtained MSN degrees, and three to four years for those who have only completed Bachelor's Degrees in Nursing Science (BSN).

The cost of advanced degree programs, whether it is a Master of Science in Nursing (MSN) or Doctorate of Nursing Practice (DNP), typically will cost between $550-$700 per in-state, semester unit in the state of Alabama. Out of state semester units, on the other hand, will generally cost around $1200/semester unit hour.

Depending on the specialty, MSN degree programs in Alabama will typically be made up of around total 45 total semester credit hours—32 of them being didactic (classroom setting) and 13 of them being clinical. Also, in addition to these credits, individuals seeking MSN degrees in the state of Alabama will be required to complete 600 hours of direct patient care.

DNP degree programs in Alabama will typically require about 30 credit hours on top of the completion of an MSN degree program. Those seeking DNP degrees in the state of Alabama will need to have completed approximately 1000 hours of clinical training in addition to the education credits they have already earned.

Four of the top five nursing education institutions in the state of Alabama that offer advanced degrees in nursing give students the ability to complete credit hours via online coursework. Allowing units to be completed online makes these nursing programs entirely more accessible to prospective advanced nursing students

To be admitted into an MSN program in the state of Alabama, an individual will need to have fulfilled the following requirements before matriculation:

To be admitted into a DNP program in the state of Alabama, an individual will have needed to have fulfilled the following requirements before matriculation:

Becoming a nurse practitioner in the state of Alabama means being able to practice in many different specialty disciplines including psychiatric/mental health, neonatal, oncological, adult gerontological, women's health, family health, and others. Within the state of Alabama there are six different universities with nursing schools that offer MSN and DNP programs. Depending on the university program, credits can be either obtained traditionally in a classroom setting, or they can be earned online. Additionally, some nursing schools in Alabama offer students a blend of the two (online and traditional classroom) to earn their non-clinical didactic classroom unit hours.

University of Alabama at Birmingham

University of Alabama in Huntsville

The University of Alabama

Are we missing your school's program or need to update information listed? Please contact us so we can make the necessary changes.