Glossary of Chromosome, Gene and DNA Terms and Terminology 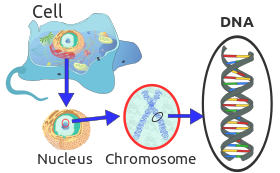 Organization of DNA in a eukaryotic cell.

Simply defined, a chromosome is a cell that, has shown in the picture above, contains protein and one DNA molecule that is found in the nucleus of the cell.

Nucleotides are the basic cells that serve as the building blocks of both RNA and DNA. Nucleotides in DNA are referred to as A, C, G and T that are connected to each other in an array with hydrogen bonds; it is A, C, G and T are the nucleotides that contain our information.

Chromosomes are made of DNA double helix strands that are wrapped around proteins; chromosomes contain and carry genetic and hereditary information.

The two types of chromosomes are the: 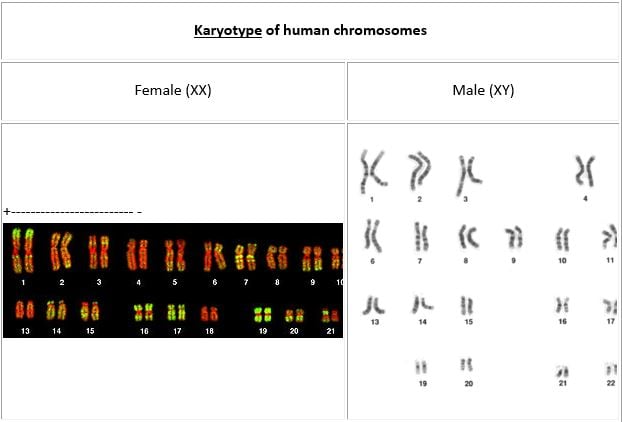 The female gender has a diploid genome of XX and males have a diploid genome of XY. When there is any variation in this XX and XY characteristic, it is considered abnormal. For example, a third chromosome number 21 is called trisomy 21, which in the past was called Down syndrome. 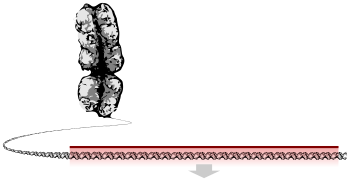 A gene is a region of DNA that encodes function. A chromosome consists of a long strand of DNA containing many genes. A human chromosome can have up to 500 million base pairs of DNA with thousands of genes.

The different nucleotides of our DNA sequences among all human beings form genes. Genes are the basis of heredity. These sequences are called genotypes.

At times, genes can become abnormal in terms of their sequencing. These abnormalities are called genetic mutations.

The chemical structure of a four base pair fragment of a DNA double helix. The sugar-phosphate backbone chains run in opposite directions with the bases pointing inwards, base-pairing A to T and C to G with hydrogen bonds.

DNA, or deoxyribonucleic acid, Is the foundation and the molecular basis of inheritance. DNA is the macromolecule, as discussed above with other macromolecules, that encodes information in the body and it also provides the basis for instructions to body in terms of its protein production. DNA is a twin chain, or double helix chain, that is comprised of a sugar group which is called deoxyribose, a phosphate group and a base of guanine, cytosine, thymine or adenine. Each strand or chain of DNA in the double helix is referred to as a polynucleotide. Polynucleotides are made up from monomers called nucleotides.

As previously stated, the nucleotides in our DNA are referred to as A (adenine), C (cytosine), G (guanine) and T (thymine) that are connected to each other in an array and formation with hydrogen bonds; it is the A, C, G and T nucleotides that contain our information.

A (adenine) is paired with T (thymine) and held together with 2 hydrogen bonds; and, C (cytosine) is paired with G (guanine) and held together with 3 hydrogen bonds, as shown in the picture above. The relatively complex process of reading and deciphering DNA is done with a 3' to 5‘ reading. The 3' and 5' ends are the opposite ends of each DNA strand.