The Role of the Respiratory System 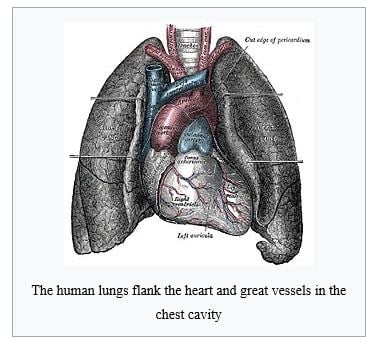 The Parts of the Respiratory System 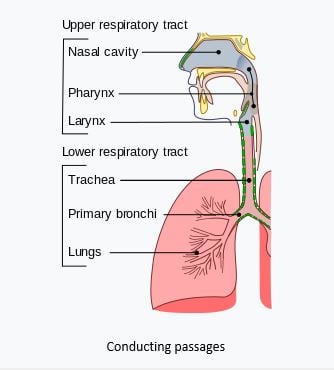 Air, including the oxygen in environmental air, enters the body through the nares and sometimes through the mouth when the person is a "mouth breather". The nose and the nares, with their tiny hair-like structures called cilia, filter environmental air to free it of bacteria and other harmful substances such as dust and air pollution. As air moves through the nose, it is also warmed before it moves along to the pharynx and the other anatomical structures of the upper and lower respiratory system.

The flow of air from the environment moves through the respiratory system in these sequential steps during inspiration:

The human body has two lungs which are the right lung and the left lung. The lungs share space in the thoracic, or chest cavity, of the human body with the heart which lies between the left and right lungs, as shown in the picture above, and above the diaphragm which is the major breathing muscle of the body and at the level of the first rib of the body. Like the heart, the lungs are protected with boney structures like the ribs and the spine.

The Other Parts of the Respiratory System

In addition to the lungs, the respiratory system also includes the:

When people say that their "food has gone down the wrong pipe", they are experiencing an abnormally small amount of food moving from the pharynx into the tracheal windpipe without the help of the epiglottis which, under normal situations, closes off the trachea from food and fluids. 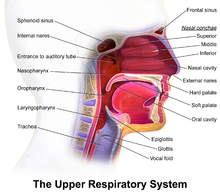 The nasopharynx, oropharynx, and laryngopharynx are labeled at right.

The epiglottis is the "flap" like projection in the back of the mouth that is attached to the larynx. It goes up during breathing to allow the air to enter into the trachea and it moves down during the swallowing of food and drinking fluids to allow the food to enter the esophagus which is part of the gastrointestinal and digestive system. This part of the respiratory and digestive system also plays a role in the gag and cough reflexes.

The trachea, sometimes referred to as the windpipe connects the pharynx to the larynx. 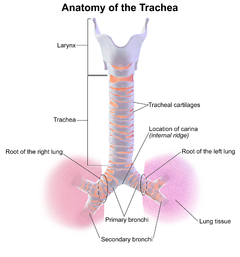 The larynx, which is sometimes referred to as the "Adam's apple and the "voice box", receives inspired air from the trachea and it then is the passage through which the air passes into the bronchi of the lung. 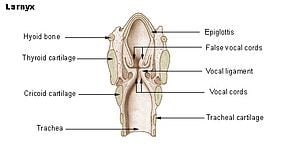 The bronchus, with the pleural of bronchi, is the part of the respiratory system that receives inspired air from the larynx into the lungs. The left and right bronchi are the entry gates of external, environmental air into the lungs.

The bronchioles, the smaller portion, and branches of the bronchi connect the bronchi to the alveoli which are the area where the physiological exchange of gases such as carbon dioxide and oxygen occurs. 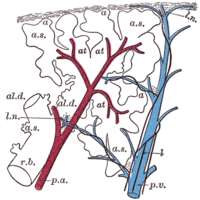 A lobule of the lung showing r. b respiratory bronchiole; al. d alveolar duct; a. s alveolar sac; 'a' alveolus.

The alveoli, also referred to as "air sacs", are the anatomical structures that enable and facilitate the exchange of gases in the lungs. The movement of oxygen into the human body from the inspired environmental air occurs in the alveoli of the lung, and the movement of the waste product of carbon dioxide from the human body back into the environment begins in the alveoli of the lung. This movement of gases occurs when the body's blood, with its oxygen and carbon dioxide, passes to the alveolus, which is the singular form of the pleural form of alveoli. 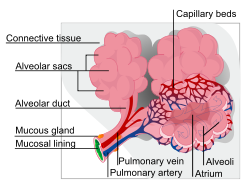 These grape-like structures expand and contract with inspiration and expiration.

The respiratory cycle includes two phases which are an inspiration, or the inhaling, of environmental air which includes oxygen; and the expiration, or exhalation, of carbon dioxide.

Each inspiration plus one expiration is one breath. The lungs expand and contract with each breath. The lungs expand with inspiration and the lungs deflate and relax during expiration. The expansion of the lungs during inspiration is possible because the muscular diaphragm and the muscles between the ribs, which are referred to as the intercostal muscles, actively allow the chest and the lungs to expand when a person breathes in. The intercostal muscles are considered accessory breathing muscles and the diaphragm is considered the major muscle of breathing.

The contraction of the lungs during expiration is possible because the muscular diaphragm and the muscles between the ribs, which are referred to as intercostal muscles and shown in the pictures below, relax, thus allowing the lungs to contract and decrease in size so that the person is able to rid air and carbon dioxide from the respiratory tract during expiration. 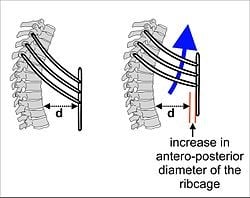 The effect of the respiratory muscles in expanding the rib cage.

Many disorders and diseases can adversely affect the respiratory system and respiratory functioning. Some of these disorders can be congenital and others can be acquired.

Congenital respiratory disorders affect the infant in the uterus before they are born. For example, a neonate, or newborn, can be born with hyaline membrane disease or cystic fibrosis.