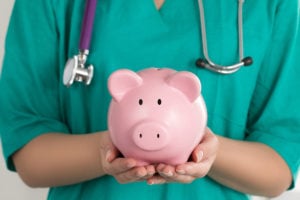 The gender pay gap is a common discussion and debate over the (seemingly) entire nation, if not world. Strides to minimize the disparity in pay between men and women performing the same work have made slight improvements but have stagnated in the past few years, according to numerous reports. There is still significant anecdotal data from women who state they have experienced gender bias in a work setting. So how is it that, in the field of nursing where male nurses represent only 12% of the overall profession, can we explain that male nurses earn around $6,000 more each year than their female colleagues?

To level-set the topic, we will acknowledge that many organizations across the U.S. have very clearly defined wage scales (oftentimes bargained within union negotiations) used for every nurse. Rates are set based on experience, length of time with the company, shift, and specialty (although many organizations do not pay higher wages for specialty areas). There are also increased pay scales for clinical ladder achievements when nurses are on committees or earn advanced certification such as CCRN, etc.

Jeffrey Scott, BSN, RN notes that, in the large and unionized organization in Northern California where he works, the staff-nurse wages are set by a negotiated contract. "In my work environment of the PACU, the nurses earning the most money are those with the highest seniority. The high-earning nurses in my area are predominately female and have been with the system for over 30 years. Although, in specialty areas such as Cath Lab, males over 50 years old are the significant majority. With the overtime and callback pay, those nurses are earning significant amounts of money, but they are willing to put the time in."

What Does the Data Say?

The 2019 Medscape RN/LPN Compensation Report details the survey results of nurses across the U.S. as they reported their 2018 salaries and job information. Overall, salaried nurses reported significantly higher annual income than hourly nurses, regardless of gender and there was actually a smaller wage gap (2.5%) between salaried male and female nurses compared to the wage gap (7%) of hourly male vs female nurses.

RELATED: RN Salary – What to Expect

Whereas men and women reported a similar hourly rate ($39 vs $38, respectively) the actual work habits of male nurses might be the proverbial smoking gun on the disparate earnings. According to the survey responses, male nurses were more likely to:

Could the answer be as simple as the semantics of the term earned? Are male nurses earning more money because they work more hours?

How Family Leave and Childcare Factors In

A notable difference between men and women that affects the wages-earned calculation is how much time off women take for childcare issues compared to their male colleagues. Jon Haws, a registered nurse, and CEO of NRSNG.com commented, "In my experience, I have not seen a difference in work habits between male and female coworkers. With that being said, I have seen more female workers step back from the bedside after having children. While I've had male coworkers have children, they do take some paternal leave, but without exception have all returned to the bedside."

A 2014 report suggests that mothers will stay home from work with a sick child 10x more often than fathers, which can affect overall earned wages, especially if she is not getting paid to take the time off. Additionally, these lost-wage days do not include additional time many women (reportedly, up to 80%) take off work for issues related to personal health. "It is clear that there is room for improvement," notes Jon Haws. "In an ideal world, I think that pay for nurses should be merit and time-based. Clinical ladders with very clear steps for pay increases should be public and adhered to strictly." With all factors of experience, environment, and assignment being equal, there is no clear explanation for the disparate pay other than, historically, men are still more comfortable asking for a raise or for higher salaries. As female nurses (in general, of course) become more emboldened to advocate for themselves at the HR table, perhaps the wage gap will begin to close.