What Does My State Board of Nursing Do?

Home / Nursing Articles / What Does My State Board of Nursing Do? 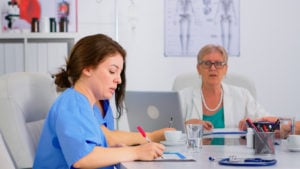 Each state and U.S. territory is assigned a Board of Nursing. Boards of Nursing (BONs) are jurisdictional governmental agencies that are responsible for the regulation of nursing practice.

All 59 BONs are members of the National Council of State Boards of Nursing (NCSBN). The expectation of each BON is to regulate the practice of nursing using defined nursing standards. Each state has their own version of the Standards of Nursing Practice.

Boards of Nursing are challenged to protect the health and welfare of the public by assuring that only competent and safe nursing care is being provided by licensed nurses. This is achieved by defining and outlining the standards for safe nursing care and issuing licenses to practice nursing.

The 4 Board of Nursing Focus Areas

Licensure is the process by which BONs grant permission to individuals to engage in nursing practice once all of the requirements of skill and competency are met. There are typically three components of nursing licensure:

This division is also responsible for issuing U.S. nursing licenses to internationally-educated nurses.

Board of Nursing Disciplinary Actions

The discipline process for BONs is intended to be a thorough and formal process. The BONs are responsible to protect the public from the risk of harm from nurses in the form of reasonable laws to regulate nursing. These laws are based on the Nursing Practice Act and allow the BONs to issue appropriate levels of discipline, up to and including termination of a nursing license. When violations occur or a complaint is filed, the BON will review the complaint and investigate the complaint. If there is merit to the complaint or a violation has occurred, the BON will go through a series of algorithms to ensure a consistent and reasonable outcome.

There are several disciplinary actions a BON may issue:

Contact your own state's Board of Nursing to view specific publications and resources.