The Role of the Endocrine System

The role of the endocrine system, simply stated, is to provide the body with the hormones that are needed to sustain life with the provision of bodily functioning and hormonal balance and to create life. For example, the adrenal glands secrete hormones that are necessary for the "Fight and Flight" response to stress and the hormones secreted by the breast provide milk for a newborn baby.

The balance of hormones in the body should be sufficient enough to perform its roles but not over the normal limits of the hormone. Hypo, or low, and hyper, or high, secretion of the endocrine glands leads to physiological problems.

The hormones that the endocrine glands secrete are natural substances that control, manage and coordinate several bodily functions throughout the body.

The Parts of the Endocrine System

The endocrine system consists of hormones and the endocrine glands. Hormones are natural substances that control, manage and coordinate several bodily functions throughout the body.

The endocrine system consists of these glands: 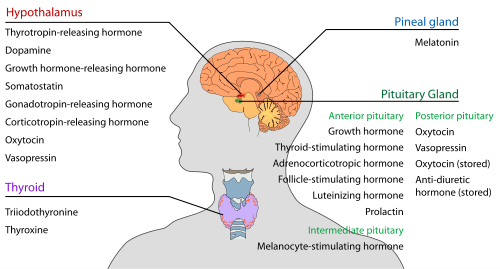 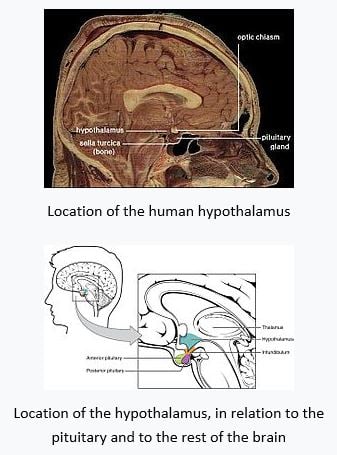 Located at the base of the brain, the pituitary gland is protected by a bony structure called the Sella turcica of the sphenoid bone.

The pituitary gland also secretes other hormones, as listed in the picture above.

Anatomically, this tiny gland is housed at the base of the brain, as shown in the pictures above.

In summary, the pituitary gland controls and coordinates: 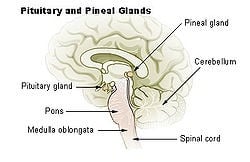 Diagram of pituitary and pineal glands in the human brain.

The pineal gland, as shown in the pictures above, is a small endocrine gland that lies in the area of the brain that is relatively close to the hypothalamus and the pituitary glands of the endocrine system.

The primary role that the pineal gland performs is the bodily control and coordination of sleep cycles and the internal clock of the body which is referred to as circadian rhythm. Simply defined, the circadian rhythm is the normal human being's 24 hour cycle of sleep and wakefulness. Humans are normal diurnal or day time activity beings and nighttime sleep beings, unlike nocturnal beings that have nighttime activity and daytime wakefulness.

The human thyroid as viewed from the front, with arteries visible.

The thyroid gland, as shown in the picture above, is somewhat shaped like angel wings or a butterfly. It has one major section on each side of the throat just above the trachea. These bilateral major sections, or lobes, are connected to each other with a thin connecting area called the isthmus. Although it may appear upon first glance that there are two bilateral thyroid glands, there is only one.

The thyroid gland, as shown in the diagram below, performs several functions. 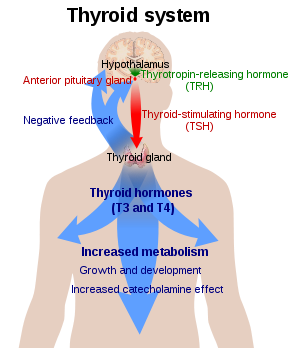 The thyroid hormones T3 and T4 have a number of metabolic, cardiovascular and developmental effects on the body. The production is stimulated by release of thyroid stimulating hormone (TSH), which in turn depends on release of thyrotropin releasing hormone (TRH). Every downstream hormone has negative feedback and decreases the level of the hormone that stimulates its release.

The thyroid gland produces and secretes triiodothyronine hormone that consists of T3 and T4, which are iodine containing hormones, and thyroxine when the thyroid gland is prompted and stimulated to produce and release these hormones by the thyroid stimulating hormone of the pituitary gland.

It also produces calcitonin which plays a role in the levels of blood circulating calcium. Simply states, the levels of calcitonin is lowered when the osteoclasts of the bones, as discussed above in the section entitled the Skeletal System, break down the bone in its normal process of bone regeneration. .

The thyroid gland plays a role in terms of the body's:

Diagram showing structures in the human neck. The four green shaded areas represent the most common position of the parathyroid glands, which are generally four in number and situated behind the lateral lobes of the thyroid gland (shaded orange). 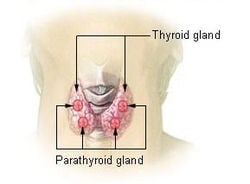 Thyroid and parathyroids as viewed from the back of the neck.

The primary and foremost role of the parathyroid glands is to control the amount of circulating calcium and phosphorous, which are two electrolytes. Calcium and phosphate play a vital role in terms of bone, teeth and the nervous system.

This control in the circulating blood is accomplished with the parathyroid glands' production and secretion of parathyroid hormone. 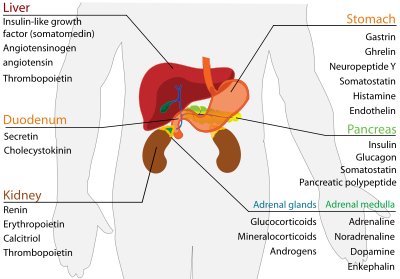 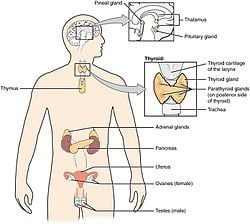 The adrenal glands, which are in the abdominal area, are located bilaterally just above the right and left kidneys and just above the diaphragm, as shown in the pictures above.

The medulla secretes stress reaction hormones such as: 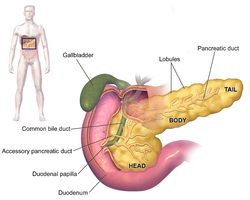 Anatomy of the pancreas.

As an endocrine gland, the islet cells of the pancreas, also referred to as the pancreatic islets and the islets of Langerhans, secrete glucagon, insulin, pancreatic polypeptide and somatostatin as listed in one of the pictures above. In terms of the pancreas' digestive system role, the pancreas produces and releases pancreatic, digestive enzymes and juices that break down foods as they enter the small intestine, as more fully described previously with the Digestive System. 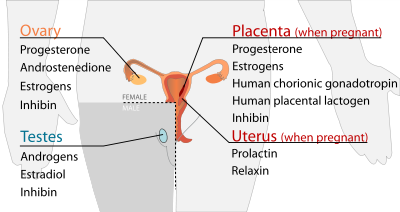 Blood supply of the human female reproductive organs. The left ovary is the oval shaped structure visible above the label "ovarian arteries".

The ovaries of the female are, in some ways, similar to the male gender's testes. Both the ovaries and the testes are endocrine glands and gonads, which is defined as a sex and reproduction glandular structure.

The ovaries, as an endocrine gland produces, progesterone, estrogen, inhibin and androstenedione, as listed in the picture above. Progesterone, secreted by the ovaries, plays a role in the menstrual cycle and the preparation of the uterus for the implantation of the fertilized egg or ovum; estrogen plays a role in terms of the development of secondary sexual characteristics such as the breasts, at the time of female puberty, or pubescence. Inhibin plays a role in the body in terms of the inhibition of follicle stimulating hormone among females and the inhibition of the development of sperm in the male and androstenedione, which is an androgen that is weaker than testosterone. 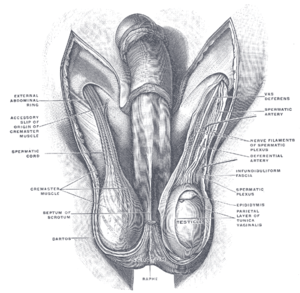 The testes, or testicles, of the male are, as suggested above, are similar to the female gender's ovaries. Both the ovaries and the testes are endocrine glands and gonads, which is defined as a sex and reproduction glandular structure.

Like ovaries, males have two bilateral testes, each of which lay on either the left or right side of the body next to the penis, as shown in the picture above.

The testes, as an endocrine gland produce androgens, particularly testosterone, and, as a reproductive organ, the testes also produces and manufactures sperm, the male cell of reproduction which joins with the ova, the female cell of reproduction, to procreate and fertilize the egg. These endocrine gland and reproductive functions of the testes are stimulated by the pituitary gland's secretion of luteinizing hormone, testosterone and follicle stimulating hormone, respectively.